Kornati Kornati represent the densest archipelago in the Mediterranean and were asked in 1980 as a national park under
strict conservation. The total area of this national park is 220 square kilometers.

The area is karst landscape. For National Park and the islands surrounding part (undersea) maritime area. 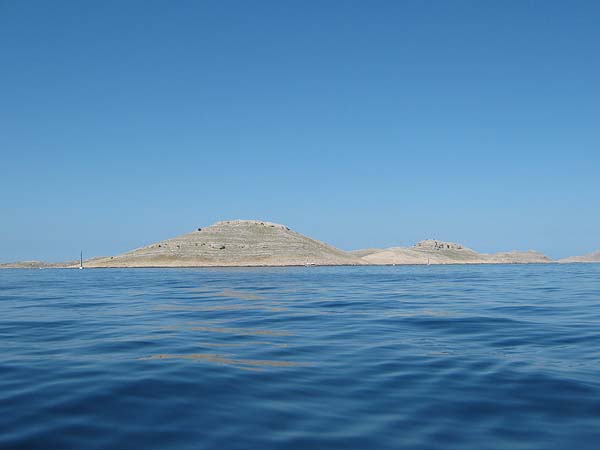 Overall, there is the National Park of 89 islands, islets and roc
ks. The largest is Kornat. The vegetation on the islands is mostly sparse. The islands consist of limestone, are either lit
tle overgrown (scrub) or bare.

There are no water streams o. The National Park Authority is located in the town of Murter on the island of the same name near the archipelago. The inhabitants of the island Murter have always been connected as closely considered with this group of islands, which is why they also incumbent nowadays the administration over the archipelago. For sailors the Kornati Cup is interesting in spring.

Information about the National Park Kornati

History of the National Park Kornati

Neolithikum
Already during the Neolithic people lived on the Kornati. This is suggested by finds of stone axes in the Zeljkovac field, below the mountain Pedinka on the island of Kornat.

Illyrer und Goten
The first confirmed colonization of the islands date back to the time of the Illyrians and Goths. This is indicated by small square houses that are individually or in groups (there are remains of example, under the mountain Pedinka, above the Zeljkovac field). Furthermore, there are small settlements (Šćikat, Stražišče, Tureta, Grba) and accumulations that indicate a larger population at that time (these are found on almost all heights on the islands of Kornat and Žut).

Das Römische Reich
Even the Roman Empire has left its mark on the islands of Kornati. So can the remains of rustic villas are admired Svrsati in Proversa and fish tanks. Other traces of the Roman Empire are mainly found under water, as the salt plant in Sipnatam or the port facilities in Vela Proversa.

Das byzantinische Reich
According to many, the rule of the Byzantines or Goths has the most distinctive building, which is located on the Kornati leave,: The Tureta fortress on the island of Kornat. The construction can be attributed to the late antiquity or the early Middle Ages and probably dates from the 6th century, even before the colonization of the Adriatic by the Croats. It is believed that the fortress was built for military purposes, in order to secure the navigation in the then dangerous Adria.
Likewise, an Early Christian basilica is (also from the time of the Byzantine Empire) below the fortress Tureta. Today most of the apse and part of the foundation walls can be visited. Due to the size of the church (30 x 13 m) suspected that during this time a considerable number of residents must have lived on the island.
Situated next to the church are traces of a building. Here, scientists do not agree on whether it is a Templar monastery or a Benedictine monastery.

Völkerwanderungen
With the arrival of the Croats in today's Dalmatia, the Roman population was forced to flee from the mainland to the islands. However, this was short-lived, since the sea posed no further obstacle more for Croats. So it happened that the Kornati almost uninhabited remained until the 13th century..

Mittelalter
From the 13th century. Kornati were resettled. Thus, various constructions can be visited from the Middle Ages. One of these buildings is the church "Gospa od Tarca" (dt. Madonna of Tarac, often referred to as Queen of the Sea) in the Bay of Tarac which was probably built on the remains of an early Christian basilica. An exact dating of this church is not possible, so vary the datings from 12./.13. C., 14th c. Until 15/16. Century. Also of medieval origin of the remains of a salt warehouse, and the submerged in the sea remains a salt production plant (probably late 14th century) in the Bay of Lavsa.

The Kornati Islands were particularly in the 16th century. For fishing known. Thus, the Republic of Venice has built on the small island Vela Panitula a fort, which has served mainly to collection of taxes on fishing in the Kornati. Very close to the castle, on the island of Piškera (Jadra) a fishing village was built. The two islands were connected by a bridge. Also a church was built with gothic elements in the fishing village, this was inaugurated in 1560th With the fall of the Venetian Republic the late 18th century. The castle was like leaving the fishing village. So today there are hardly any traces of the village yet, the same is true for the fort. However, the church was restored. You will still visits regularly today.

Getting there - Krka National Park

In the resorts numerous travel agencies offer an organized trip to the National Park. All visitors of the National Park must pay a fee of 30 kuna. In low season the price is reduced to 20 kuna. Due to the many checks a ticket in any case is necessary. Organized day-trips cost about 210 kuna. These day trips usually crossing, menu and shore excursions with bathing facilities. These trips can be booked in the following places: Dugi Otok, Murter, Veli Iz, Ugljan, [[Island of Pasman | Pasman] (Vodice) and from Zadar and Biograd. The island passage between the islands of Kornat and Smokvica is called official National Park entrance. The Kornati National Park is car free.

In the central administration of the national park in Murter on Murter island and on the island Zut can purchase tickets for the Kornati National Park.

On the islands there is also a tourist office. It is located on the island Ravni Žakan.