Paklenica National Park is a national park in the Velebit mountain range 30 km northeast of Zadar on the Adriatic and about 1 km from Starigrad. He was declared already in 1949 to the national park. The highest peaks are Vaganski Vrh with 1,757 m. i. J. and Sveto Brdo (1750 m. i. J.) Paklenica in Croatian means "little hell" 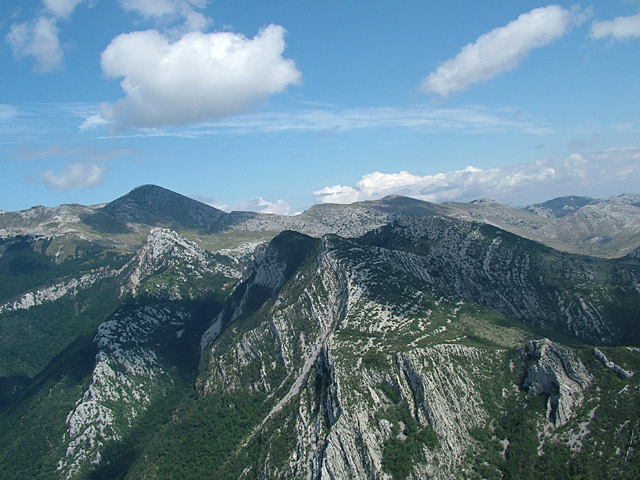 The name was probably due to the rough and steep karst cliffs, which are home to numerous hidden caves and sun illuminated the association with the underworld awaken. An alternative explanation bears the name back to the frequently occurring in the park Pine, whose juice (Paklina) previously used for impregnation of boats.

To get to know the diversity of the Park provides 150 km of marked trails. In some areas, it is strongly advised them not to leave due to continue existing landmine danger. The tents are not permitted in the park, but some mountain huts and (free) shelters are the walkers available. Water is in the park and sufficiently available in drinkable quality.

Although the Velebit mountain has many beautiful viewpoints and varied hiking Rods to offer, particularly the large and the small canyon - Velika and Mala Paklenica - famous with locals and visitors because of its beautiful landscape. According to the area in 1978 and declared a UNESCO natural park and placed under special protection. This 36.5 square kilometer area near Zadar and Starigrad extends over 1758 meters and I especially with climbers popular since the steep gorges are each level meet while still represent a challenge. The part only 50m away from each other lying almost perpendicular Karst walls rise up to 500m and from any point, you have a good view of the Adriatic Sea, which is separated from the massif by a narrow coastal strip. But also for hikers and other nature lovers the National Park Paklenica is a worthwhile destination: leisurely trails reward with a fantastic view and in the protected territory of the park you have to observe the rare occasion some of the last wild vultures in Europe.

Information about the National Park Paklenica 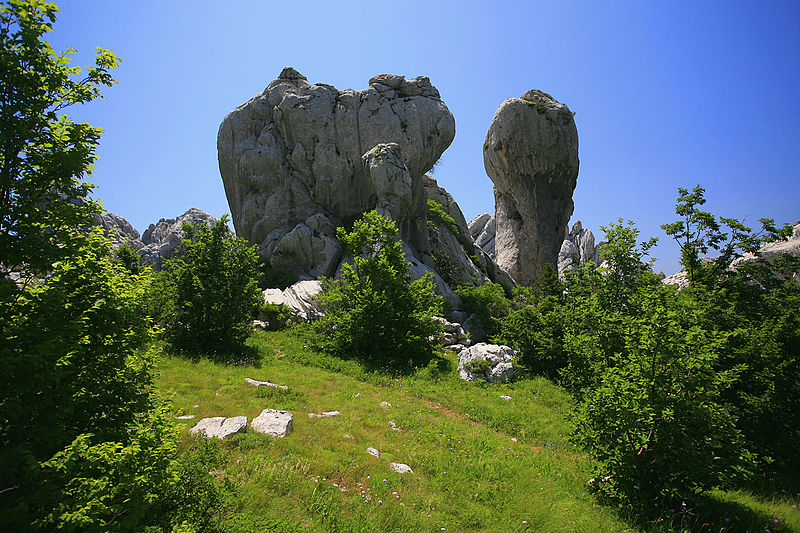 The Velebit Mountain and particularly the region of the National Park Paklenica have always been known among climbers.

The one studied here their sporting challenge that other published scientific papers to flora and fauna, the climate in this coast-hugging mountains or the geomorphological processes that formed the unique panorama. But only in 1928 the gorge was declared a national park, in the following year, this status was not reconfirmed.

Until the 90 years inside the protected area included just an area of 36.5 square kilometers, which was, however, been extended to its present form.

Today includes two gorges and a large part of the hinterland to the 102 square kilometers of natural park. Thus it is ensured since 1997 that up to 400 meters high cliffs, the fertile forest land and the unique panorama preserved for future generations in all its beauty. 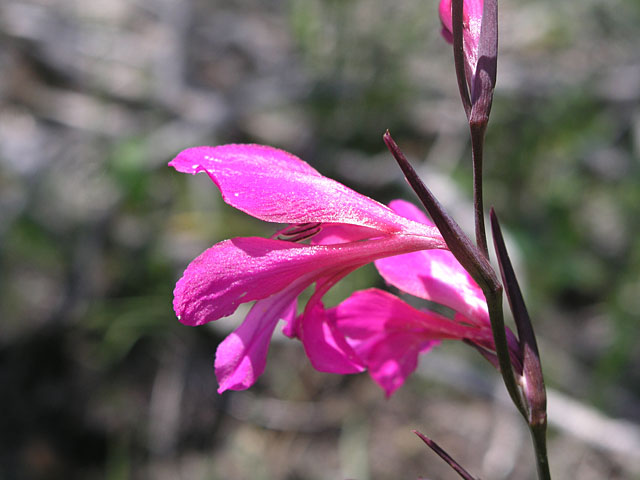 In the steep slopes and the overhang of the gorges hardly anything grows, extremely resistant grasses and decorative Alpenseidelbast can survive in the inhospitable environment. On the more moderate slopes contrast, offers a wide variety of Croatian vegetation: to sea thrive Mediterranean plants, the land side can discover the continental-alpine Bewachsung. With the foot of the mountains extend huge forests full of beech, oak ash, firs and pines, near the summit from thinned and more forestation and more floral and herbal plants found in.

Because of the far inland hineinschneienden gorges typical coastal animals mix with the characteristic domestic fauna in the area of the National Park Paklenica. Especially many rare species of birds feel at home on the cliff walls of the corridors, here you can spy among others, the fence and the Schwarzkopf Ammer, coastal tree pipit and the nuthatch.

Who sees revolve too much swinging about himself lucky enough to 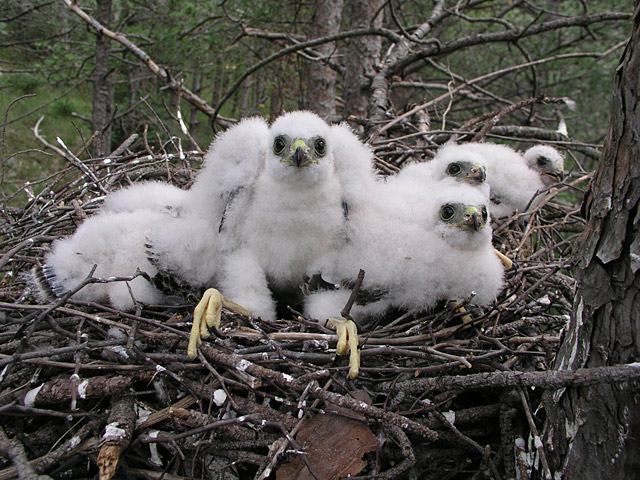 experience one of the threatened with extinction toed eagle, golden eagle and the giant griffon vultures in the wild. National Park Paklenica 15 These scavengers are not only tolerated in the park, or see an attraction, they also fulfill a practical purpose: dead one of the sheep on the pastures of the mountain would be taken away for cumbersome, slow decay of the carcass on the other hand would lead to diseases among the surviving animals - and so does the vulture with this "feeding" the function of a "biological waste disposal".

In addition to the birds of the air space is populated by colorful butterfly species, the soil in the lower plains heard the lizards, snakes and tortoises.

In the forested areas can ever come across one of shy bears, wolves or wild cats that still live freely and blameless here. to discover your tracks in the jungle does not fall the expert trackers hard to get the animals themselves, however, to face a rarity - but that's many a perhaps rather SOA € | Zahmer and many are attendance chamois that you see on vertiginous ledges can.

They were once native to the mountains, but were domesticated or cut and exposed again in the 1970s. Since then they have their "new old habitat" developed largely and seem to enjoy the rich variety of sight sport climbers as well as vice versa!

Attractions of the National Park Paklencia

In eight hours, it can the experienced and fit hiker create vrh from the parking lot to the great canyon of up to 1758m high summit Vaganski.

In between, still take a short breather and a snack at the 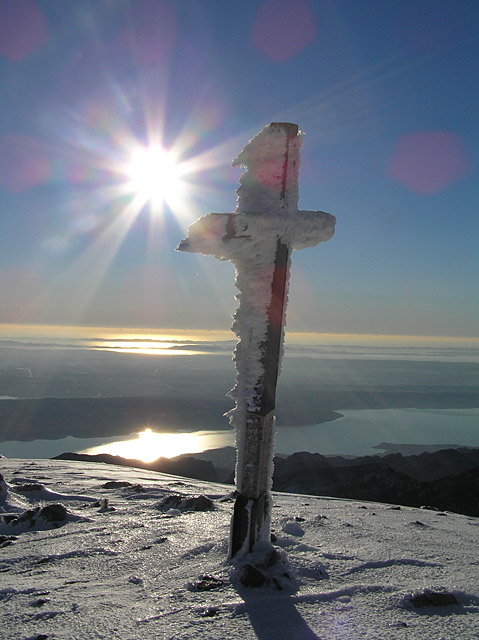 hut Lugarnica at 440m altitude and then continue the way through a picturesque creek and along the summit Crljeni kuk and Babin Kuk.

But this tight athletic program lets the beauty of nature and enjoy the unique scenery on the sidelines.

Once at the top you are particularly proud and exhausted - but the nicest missed. It is therefore recommendable to explore the park in several small stages.

The 150km trail routes are marked on the maps of the park administration.

Who does not want to run with all the other tourists.

Should not leave the park entrance, but continue to follow the road slightly to the large canyon into or go over in good weather in the small canyon and there looking for his way his car.

Here the trails are, however, largely left to nature, which can recommend a good equipment.

In the hot summer time you are looking for from the dry riverbed of a beautiful view of the slopes and the many white-headed geese greed here seclusion.

But when using the rainfall is a walk only with a good travel companion or after exploring the area in the dry state a good idea.

The most beautiful of mountain caves of stalagmites prevailed Manita pec and its impressive underground halls and corridors. 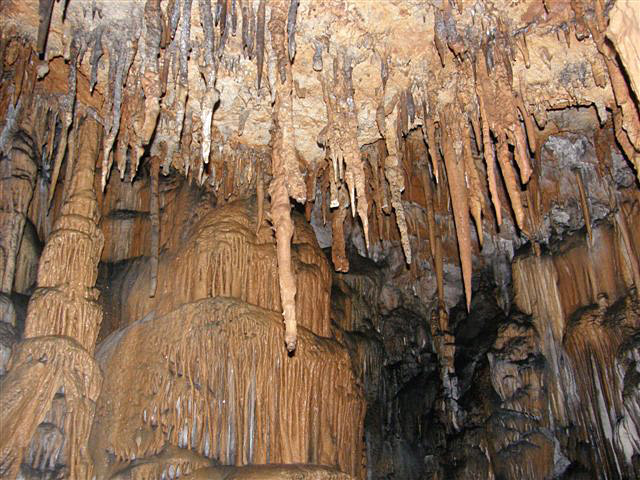 Up to a depth of 175 meters, the natural vault has already researched and developed, so that it in July and August, and then include a week with a trained tour guides several times in the months before.

Registration for the tours - individual visits are not possible for safety reasons - taken note of the management of the park in the hotel Alan.

In rough area of the national park donkeys are often the only means of transport of. What visitors appears as rural idyll and homage to pre-industrial times, the population itself is often troublesome. The youth are drawn from the stables to the universities and so grow the big cities, while places like Jurline, Veliko Rujno and Ramici with its stone walls and grazing land for most of the year, leaving the natural park are.

Only to escape for the holidays and to the bustle of the city return especially the older residents like to return here. Few residents still live year-round in places like Marasovici where they but mostly waiting for hungry, thirsty and tired hikers and pursue no longer the extremely powerful exhausting farm work on the stony, rocky ground.

Situated at the entrance of the large ravine near the parking lot, the climbers and those who want to be hit. In this relatively simple area safeguards are sufficiently attached to come slowly to the taste of the vertical movement.

A special attraction are the griffon vulture nests that are located above the climbing routes. 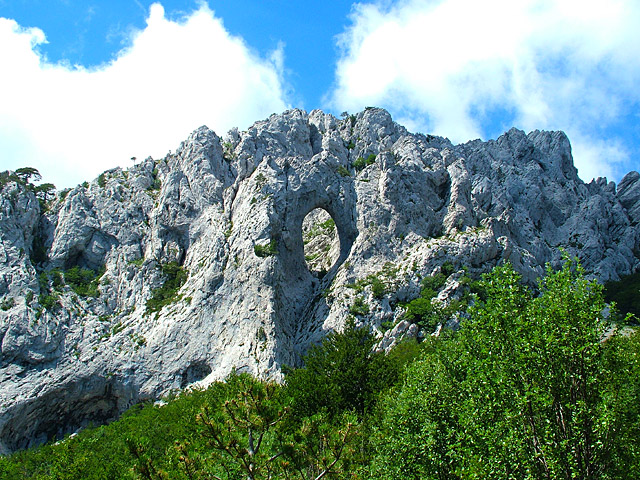 These regions are locked course for the athletes, but the circling birds of prey and their presence in Horst are for waiting climbing fans a welcome entertainment.

The further you advance in the national park, the more demanding are the routes: In the pension Rajina to professional climbers meet new routes or to place in the extensive archive to browse to the original reports of first ascents.

Renowned Freeclimber have left here valuable tips and researched for their own guide.

Peacefully and aesthetically are the routes on the west wall of Anica kuk, which, however, already require an hour-long Hinmarsches. At this 400m high cliff and courses are offered in the summer.

Those wishing to explore the connector, which already demanded some tragic victims, on their own, taking the best with his camping gear and distributed climbing and hiking tour over several days. Then Vidakov kuk, kuk Bojin, Babin Kuk and the walls of the small canyon but unique experiences and challenges in which you should watch only, not to overestimate his own abilities.

Images of the National Park Paklencia 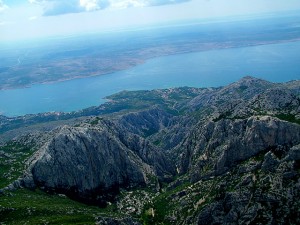 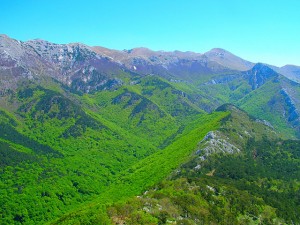 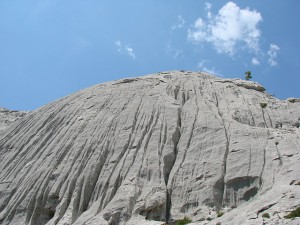 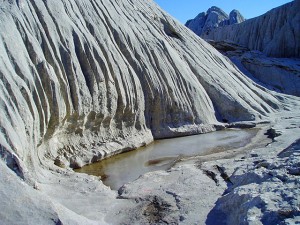 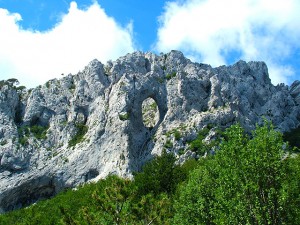 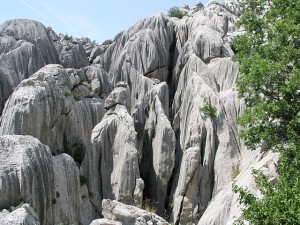 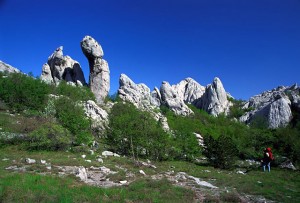 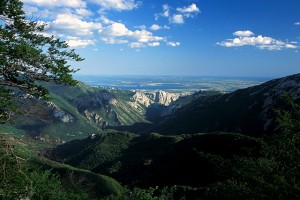 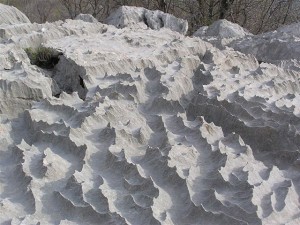 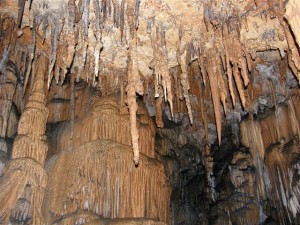 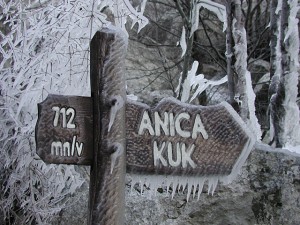 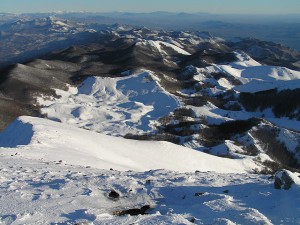 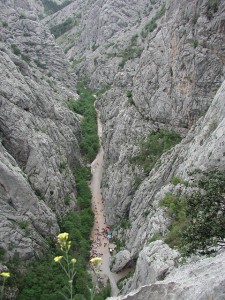 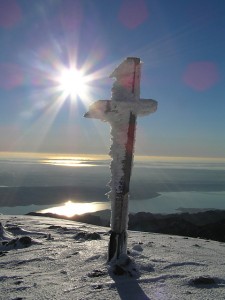 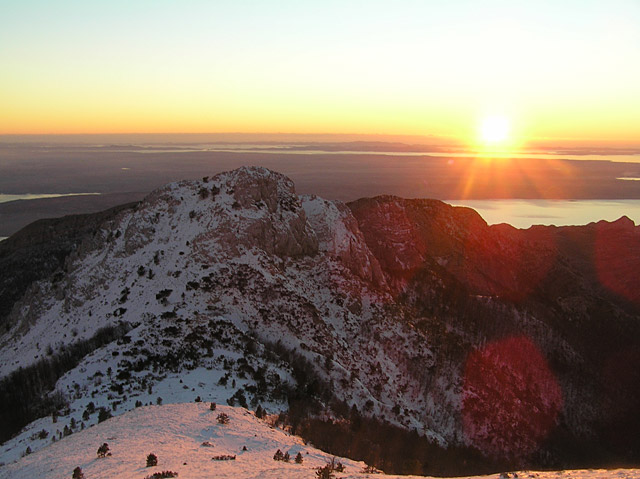 Approach to the National Park of Paklencia 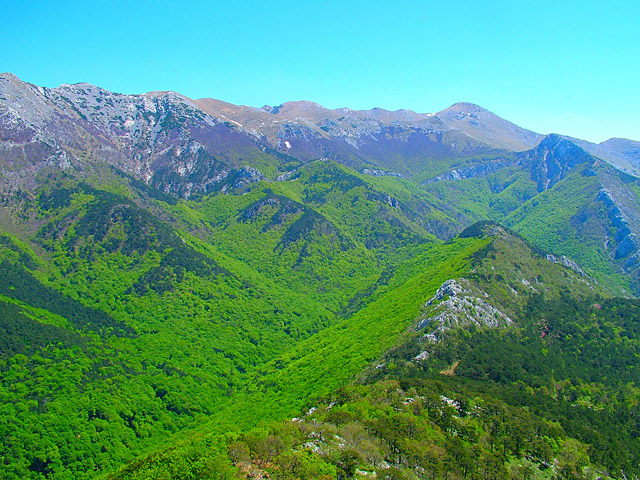 Well-developed motorway network in Croatia you drive to the coastal town Starigrad and follows from here signs to Paklenica.

Hotel Alan, where you can also live comfortably on multi-day visit, to find opening times the administrative center of the park and competent partner for questions, flora, fauna and everything else you want to know about the ravines.

From here a well-marked road leads to the main entrance and the beginning of the great gorge Velinka Paklenica. In the park itself there are numerous advertised roads and hiking trails to choose from.

On the one hand seems in Velebit mountain at 1840 hours per year, the sun, on the other hand here are much more violent and more frequent precipitation than in the coastal regions recorded. In the heights it sometimes causes the summer to fog banks and the temperatures are usually lower than those of nearby cities.

Therefore it is advisable to also take in the sunshine and supposedly brilliant weather a sweater or rain jacket with the hike. With luck, you can even repurpose exclusively as picnic blanket!