Murter is the largest inhabited island of the archipelago Kornati. The rotating bridge connects Murter to the mainland. The marinas in four different places on the island of Murter, Betina, Jezna, Murter and Tisno are the perfect starting point for charter trips to the Kornati islands. The islands of Kornati National Park is owned by the inhabitants of Murter. Although each location has its own marina, the largest among these is the Marina Hrmina in Murter. Murter has a stunning nature, with many bays.

Murter is not a place of great cultural history, the island impresses by its natural wealth. Reefs, bays, cliffs, olives and vineyards, the Vrana lake, the Murter Sea and of course the Kornati archipelago. The Island tells the story of young people who have wrested in the past centuries the natural fruit.

If you start your sailing cruise on Murter you should look at the Gajetas, the original vessel from Murter, the residents went on them to their plots on the Kornati islands and they are still in use.

The inhabitants of the village Murter are called Kurnatare. They own almost all the islands in the Kornati National Park. Former peasants, they became in  the 19th century sea mariners, fishermen and shipbuilders. Many votive chapels show the hard life in this period.

Marina Hramina in the village Murter houses most charter companies. A small supermarket supplies the sailors with the essentials. A large supermarket in the south of the bay os good for purchases of food. The nearby central village square has many restaurants, cafes and shops.

Marina Betina is located in the northeast of the island. A large folklore festival is held there every year in early August.

Marina Hramina and Marina Betina  can only be entered from the north because of the lift bridge at Tisno. But many rocks and shoals make this a difficult passage, to be sure, it is recommended to sail from the north between O. Arta Velika and along the mainland. This path is well buoyed. Jezera and Tisno are fairly straightforward to drive from the south.

In the distant year 1938 due to the approval of PRIMORSKA Banovina on behalf of the shipbuilder from Murter Markov Mira the first shipbuilding activities for the development and repairing of small boats was established. In 1948 with the national act of the Republic of Croatia under the number 9283 III / 2 the private shipbuilding was banned. Further on the private property went into cooperative ownership.

In the period from 1948 to 1974, different forms of shipbuilding service activities (repair and construction of new timber ships) alternated. In addition, a company for the engine repair (mechanical work) was formed.

In 1974, the labor organization SLANICA organized a working unit of the listed customer service, services in shipbuilding and mechanism.

In 1979, the labor organization SLANICA formed the organization MARINA BRODOSERVIS (= ship service), which offers complete customer service to the local population and the owners of motor boats and yachts. In that year, a 15 - ton crane was purchased and a plateau for ship adoption cemented, so that contracts for the storage of vessels were closed for the whole year. Therefore is the year 1979 taken as the year when Marina "HRAMINA" began with their true activity.

In 1983 as a part of the work organization SLANICA the basic organization of associated labor (GVA) MARINA HRAMINA Murter was constituted. The number of ships that used the storage and the customer service was getting bigger and marina also became famous among the Austrian, German and Italian markets. There was already a charter fleet "Adria Yacht Club" Vienna, Austria (they had in the beginning only 5 vessels and in the later years grew to 40 ships, renamed itself in Adria Yacht Center and became one of the largest charter airline in the Adriatic area). New quays were built and boaters were provided with more content.

From 1983 to 1988, the offer of the Marina became complete. The main object was developed with restaurant, sanitation, duty free shop etc. The charter fleet became the largest fleet in the Adriatic, with over 120 charter vessels of the company "SAS" Zadar. With the "AYC" - ships the number of vessels increased to over 160. The Regatta "Murter Kornati Cup", which takes place in April each year, is part of the tradition and attracts a large number of competitors every year.

In 1988, the GVA MARINA HRAMINA was organized and the work organization MARINA HRAMINA Murter was constituted. According to the estimation of the tourist patrol, the marina takes the second place on the Adriatic with their content, service, location and beauty.

In 1989, MARINA HRAMINA was registered under the name Marina HRAMINA, as a nautical tourism company with full liability, Murter, Put Gradine bb. It reached its culmination after the inlets of ships in transit and after the signed contracts. A new 50-tonnes - Travel lift was bought, new plans were made and capacity expansion projects were designed in order to improve the service. Ships in transit went up to 7,000 pieces during the sailing season. The contract number of individual ship owners for the annual mooring on the mainland reached 320, with the chartered vessels accounted for (160) 480 ships.

In the years 1990 - 1996, the Marina, as well as the majority of tourism businesses experienced a stagnation due to the war, from which it is recovering only slowly in recent years. However, we can emphasize that the Marina "Hramina" in time, while the grenades fell north (Biograd, Zadar) and south (Vodice, Biograd), had its loyal guests. So it had in the most difficult days over 170 vessels under contract.

In 2001, the marina has been registered with the transformation of the company as a trading company named MARINA HRAMINA AG for nautical tourism, with its seat in Murter, Put Gradine bb.,.
In 2002 the new company Marina Hramina d.o.o. for nautical tourism was founded, which received on 24. 10.2002 a license to use the port Hramina by the Government of the Republic of Croatia. The marina was enriched with new content (service, repair shops, stores of marine equipment, an extended parking and new restrooms). At the same time the interior (restaurant, terrace, bar, reception) and the exterior (parking, coast, green) were improved.

In 2003, the concession of the Marina Hramina d.o.o. was extended from 17.04.2003 until 31.12.2037 by decision of the Government of the Republic of Croatia. A wine cellar and restaurant were purchased on the island Ravni Žakan of the Kornati Archipelago and the main pier was prepared. Furthermore, many other improvements have been made. 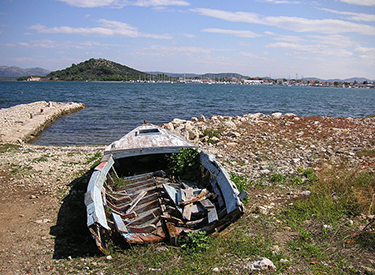 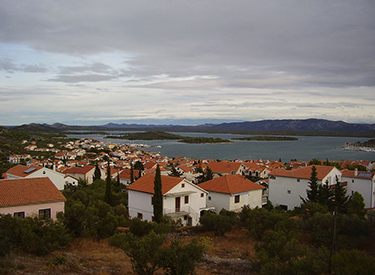 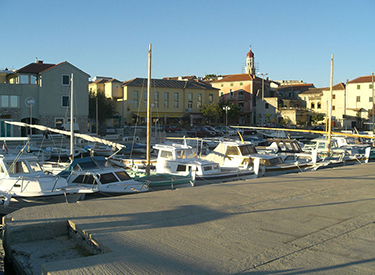 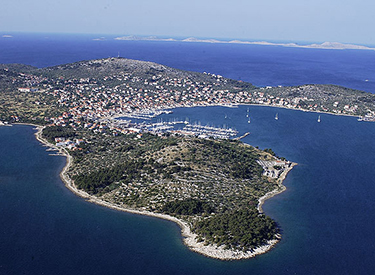 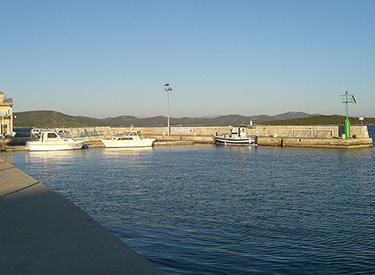 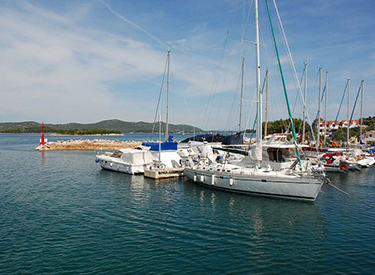 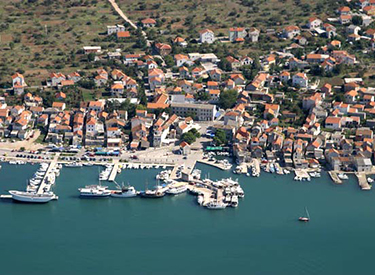 The marina has its own restaurant with the name "Butina", with a capacity of 400 guests and a terrace overlooking the sea. You can enjoy here various seafood, but also the continental cuisine.

Cafe bar with terrace, is open until late at night.

The Bootel "Stomorin" has 10 rooms of the half apartment type (36 beds). The rooms overlook the sea and have a balcony and toilet facilities (in the main building, and in the entrance building).

The marina has its own wine cellar named Zakan, which is located on the island Ravni Zakan. Besides a safe berth, we offer a local cuisine with fish and meat specialities  a la Kornati.