Vodice is a tourist destination known for its lively and various tourist offers and pleasant people. The town is located on the coast, in a wide bay, 11 km northeast of Sibenik, it is the capital of Sibenik-Knin County. Today Vodice have 10.0000 inhabitants and it is the ideal getaway where every guest will find something suitable for himself.

Information about the Marina Vodice:

The History of Vodice

In the hinterland of Vodice developed first settlements already in prehistoric times. Along both sides of the road leading into the city, are our roots and history hidden.

Rakitnica, Mrdakovica, Pisca, Kamena and Okit are names of fertile estates owned by our hard working people. Once were here estates and villages in which people worked and lived. The continuous life since the Iron Age in these areas testify numerous findings. Over time, these settlements have expanded, new residents came and brought new cultures. 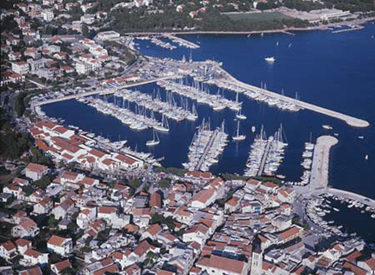 From Nadin to Zaton led an important Roman trade route along which many settlements have emerged. Archaeological findings in Dragisici and Velika Mrdakovica witness this. In Velika Mrdakovica were found remnants of the pre-Roman settlement and the Liburnian necropolis from the 4th Century BC. Rich findings of glass jars - probably the most valuable collection on the territory of the Roman Empire - testify that this is an important settlement, which is often compared with Arauzona, writes Plinius. At the foot of the place is a Roman water reservoir, a natural cistern for collection of rain water, which was used to supply the population with drinking water.

On the water-rich and fertile fields of Vodice flourish olive trees, vineyards and trees Vistula (morello). Remnants of human settlements were found here, still preserved are wells and pools of water from where the cattle drank. On cultivated fields are high stone walls, which were used as agricultural boundaries - and now are the evidence for the strong Dalmatian spirit, will, strength and endurance. Preserved are also the so-called "Bunje" old traditional pastoral accommodations that have served as a secure shelter from the storm as well as storage space for tools.

The hardworking and God-fearing field worker, built their churches near cemeteries near their settlements. The inhabitants of Mrdakovica and Pisce have built in 1298 the church of St. Elias, which was dedicated in 1493. The neighboring settlement Rakitnica was mentioned in 1251 as a estate of the famous family Subic. The construction of the church began in 1415, but stopped soon due to disagreements. The parish of St. John in Rakitnica was founded in 1448. In 1509 they began to build the still well preserved Gradina on the mountain top Rakitnica. The inhabitants of the place had to prepare work force and 50 ducats for the construction of the lime pit, and the rest the nobles had to give. In the 15th century when the Turkish conquests have extended into this area, the Venetian authorities in Sibenik said that in all the inhabited settlements, as well as all higher elevations, watchtowers and walls should be built, namely to protect the population and for defense. There are records of a certain Mate Spironic (Bombardijer) from Sibenik, which came on duty in Gradina in 1521, for a whole year to defend the castle and the village. When the Turks in 1522 conquered Skradin, the parish Rakitnica fell under the free diocese of Sibenik.

After the outbreak of war between Venice and the Turks in 1570, the Venetians from Sibenik have sent the troops to Gradina. The Turks conquered Rakitnica the next year and most of the inhabitants fled to Vodice. The Turks remained in Rakitnica and Gradinaand here dwelt the Aga and the gate guard. From Gradina the Turks had the entire area under their supervision, from Murter to Sibenik, and became a threat to the towns along the coast, including Vodice. Several times they tried to conquer the island Prvic. Sibenik has tried to liberate several times Rakitnica, but had not been able to recaonquer such a good fort. 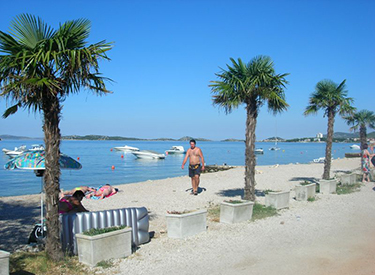 The Turks attacked Srima and Vodice in 1646. The residents of Srima fled after exhausting battles on the island Prvic, and the Turks have settled in their settlements. Then Vodice needed help: on one side Vodice had the Turkish Rakitnica in the back and on the other the Turkish Srima to the east. At night the residents of Sepurinje returned with the boats quietly back to Vodice. Together with the inhabitants of Vodice they knelt before their priest Petar Mesalinic which held the crucifix in one hand and a sword in the other. Together they prayed to Our Lady for help: "Our Mother, Queen of Croats defend our village of the war!" At dawn, the Turks attacked from Srima and Okit with 400 cavalry soldiers under the leadership of the notorious Ibrahim Pasha. It was fortunate or heaven sent the merchant ship from Daul Dot from Zadar. Just this morning at the last moment it sailed into the harbor Vodice and could help the exhausted defenders. The firing of the ship's guns into Turkish troops halved its forces. After this event, the Turks have not attacked Vodice so fiercely. The struggle and the great courage of the inhabitants of Vodice describes in a songbook the folk poet Andrija Kacic Miocic.

Life was not only restricted to wars and conquests. People have learned to live together in new circumstances and it was not unusual for Christians and Muslims to marry each other and to close friendships.

Peace returned to this area after the signing of the Peace of Karlstadt (Karlovacki mir), and after the complete defeat of the Turkish army in Vienna. After the Turkish power was weakened, the normal life came gradually back on. People went fearlessly to the overgrown fields and some settled in the old residential areas, but the majority remained in the village. The hardworking and persistent field workers were again known for its olives and Vistula, which they delivered for processing to Zadar.

At that time there were only a few houses on the coast. Here the market was held, and domestic agricultural and handicraft products were exchanged with those who came by boat. Vodice is in some sense a phenomenon: It exported drinking water until the end of the 19th century, and it thanks the fountain for its development. In the main square, two wells exist as a reminder of the tradition and the old ways. The well was not only the place from which they took water and where the laundry was washed, it was also a gathering place for social events. Couples met here and marriages were agreed, people danced here and sung. People gathered and parted, laughed and cried here.

A high protective wall with three towers was set up to protect the inhabitants and to control the travelers who came to the city during the 15th and 16th century. The houses were lined up against each other, the streets were so narrow that hardly a car could drive through. Some streets were so narrow that two people could not walk side by side. This design was chosen in order to protect themselves from enemy and winter. 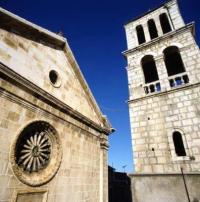 A possibility of accommodation was set outside the city gate (BaDz-han). The market visitors had to leave their horses and weapons, especially the enemy, the Turks. In 1878 a new building was built on the foundations of the old quarter, which now houses the town library.

As the Turkish threat subsided, the towers of the walls were torn down and the stone blocks were used for the construction of new houses. Today we can only guess how the wall stretched and where the towers stood.

In the middle of the place stands even now the tower "Coricev Toranj" built in 1646. The tower was not built as a part of the fortress, but arose from a rich family Fondra from Šibenik during the construction of their mansion.
One can assume that other forts were similar. Older people from Vodice still remember the Pigin tower because it was demolished after the Second World War. The second tower was apparently on Polyana and the third at the end of the road the Croatian fighter ("Ulica hrvatskih boraca").

The big pier was built in 1646. At that time, Vodice experienced an economic boom, especially after the final retreat of the Turks. More and more houses were built outside the city walls. The population began togrow  rapidly and in the little church of the Holy Cross was too small for all believers. It was decided to build a new parish church in the town center. The construction began in 1746 and lasted until 1749. The church was built by the famous Baroque master Ivan Skoko. Next to the church, the architect Vicko Macanovic from Dubrovnik built the bell tower.

Vodice is since 1891 an independent municipality with villages like Drazice, Pisca, Okit, Rakitnica, Stajice, Vrbice and Tribunj. Vodice is gaining importance as a commercial and administrative center.

Today Vodice is the most famous tourist destination on the Adriatic sea, and that is no coincidence. So it was fifty years ago, when the inhabitants of Vodice have decided for this industry.

The Marina Vodice is located in the northeastern part of the Vodice port (in the Vrulje cove) protected by two piers.

Six years in a row, the ACI Marina Vodice was honored with the prestigious award "European Blue Flag". 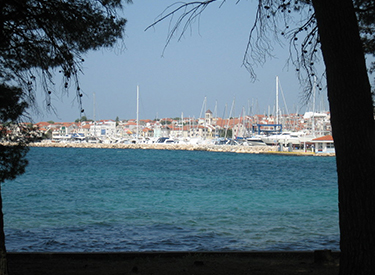 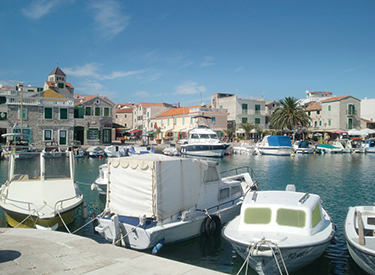 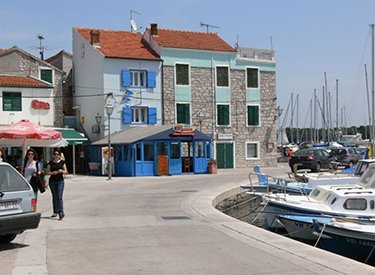 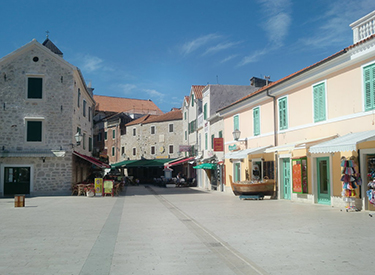 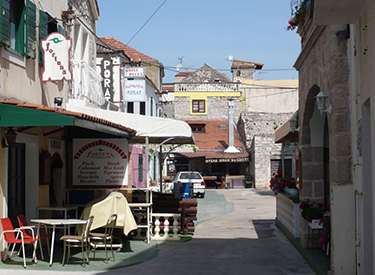 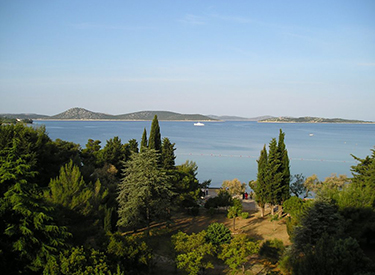 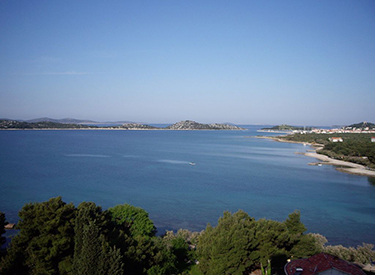 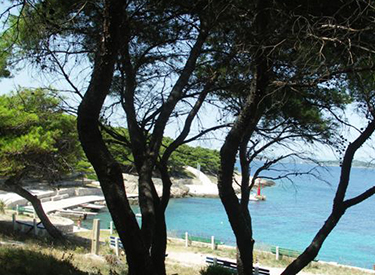 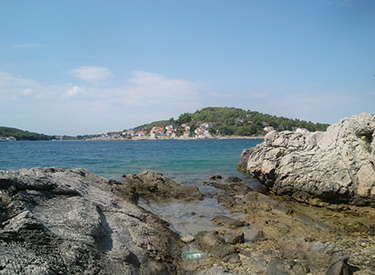 The marina is open year-round.