Yacht Charter Dubrovnik a city with a long cultural and eventful past. The marina Dubrovnik skipper tip and destination for sailing.

"Paradise on earth" as George Bernard Shaw called Dubrovnik. Located on a facing inland rising rock is Dubrovnik surrounded on three sides by the sea.

Dubrovnik has a long culture and eventful past. The city Dubrovnik dates back to the year 1272. Dubrovnik was taken long ago in the UNESCO list of world cultural heritage. Since the beginning of the 20th century Dubrovnik was developed for tourism it was important that the city was well connected with land, sea and air. The narrow picturesque streets of the Stradun promenade, the massive extremely impressive ramparts and fortifications and the delicate stone cutting testify to long lasting cultural activity of the city Dubrovnik. A summer festival with a lot of theater and music events and folklore activities is organized since 1956 and is evidence of the ongoing vitality of the city Dubrovnik.

Dubrovnik is a city in the southern enclave of Croatia at the Adriatic coast. The city is often called the "Pearl of the Adriatic" and "Croatian Athens" because of their cultural significance and the special political position for centuries. In 1979, the city of Dubrovnik joined the UNESCO list of world cultural heritage. 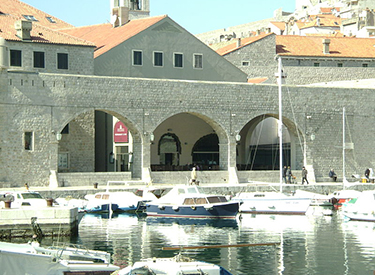 Dubrovnik is now the administrative center of the Dubrovnik-Neretva County (Croatian Dubrovačko-neretvanska županija) and seat of the Catholic Diocese of Dubrovnik. In 2001 the city had 43.770 inhabitants. The majority of the population are Croats 88.39%. There are also some Serbs and Montenegrins, Bosnians, Albanians, as well as a small Jewish community. Dubrovnik was one of the centers in the history of the development of the Croatian language and literature. Numerous important Croatian poets, artists, scientists, mathematicians and physicists are from this city. Dubrovnik can now be seen as a cultural center of Croatia.

Dubrovnik was for centuries an independent city-state, which had commercial relations with south-eastern Europe and the Mediterranean. Next to the name of the town still exists the motto "Libertas" (Latin for Liberty). Today, this term is, among other things reflected in the motto of the Dubrovnik Music and Drama Week Festival. The people of Dubrovnik (Croatian Dubrovčani) can be found in the words of their poet Ivan Gundulić: "Non bene pro toto libertas venditur auro" (English: "For all the money in this world, we will not sell our freedom.")

The Croatian name of the town is derived from the Slavic word dubrava (oak grove), the Latin name Ragusa / Rausa goes back to the name of the small island where the first settlement (Lave, Lausa) was created. 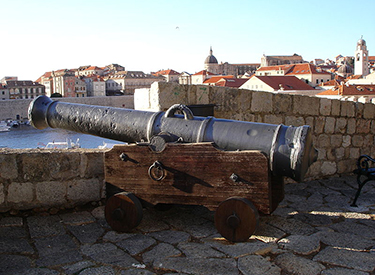 New archaeological findings prove that on the rock, which was called in the ancient Ragusa, in the 3rd century BC an Illyrian settlement existed.

With the reorganization of the Roman Empire and especially the church administrative conditions in the middle of the 6th century the rock was fixed around 550/60 under Justinian I, and basilica was built with larger dimensions (31 mx 18 m) on the site of the present cathedral.

Already during wars with Goths in 533/34 Ragusa played a role in the operations of Belisarius. At the beginning of the 7th century the inhabitants of the destroyed Epidaurums settled in consequence of Slavic invasions (today's Cavtat) on the fortified island.

Emperor Constantine VII Porphyrogenitus (905-959, reg. 945-959) describes in his De administrando Imperio all people of the Empire, as well as those that border with the empire, and the origin and history of the towns in that area. According to Porphyrogenitus the oldest name of Dubrovnik was Lausion, which derives from the Greek word Lau, meaning as much as steep. Over time, the L transformed into an R, then the name Rausion and later Ragusium was formed. The following versions are also known: Rausium, Racusium, Rausa, Ragusa, Racusa. In the papal bull of Pope Benedict VIII, which was submitted in 1022 to the Archbishop of Dubrovnik, the name Labusedi can be found, which derives from the Latin word labes. From the Greek therefore derive the names Lausion and Rausion, from the Latin the names Labusa and Labusedi.

After the Slavs repelled the population of Epidaurum, they settled in this town. They founded a settlement on the mainland at the foot of the mountain Srd, across the same named island which was covered with a thick oak forest, on which the Roman population had fled. Oak in Slavic means dub and so the name Dubrovnik was formed.

Over time, friendly relations developed between the island's settlement and the Slavic population on the mainland.

In the 12th century the canal between the mainland and the island was filled, causing the two settlements to grow together. At this point is today the famous main street of Dubrovnik, Stradun (Placa is the filled-sea that separated the island from the mainland). At this junction later on developed the center of the united city. In the period that followed the two nations united and assimilated. As the Slavs surpassed in number the Roman population both settlements received the name Dubrovnik. The Archbishopric of Ragusa was founded in 980.

Dubrovnik stood since its foundation under the protection of Byzantium (some time here resided a Byzantine strategist). At the turn of the 12th at 13th century Dubrovnik was allied with the Bosnian Ban Kulin. Bosnia became an important supplier of raw material of the city (wood and metal). Simultaneously Bosnia was an important trading route to the interior of South Eastern Europe. At the time of the Crusades, the city was temporarily under the rule of Venice (1205-1358). In 1242, the city was under siege of the Mongols and the region was devastated. In 1240 and 1244, the alliance with Bosnia was renewed.

After the peace treaty of Zadar in 1358, Dubrovnik acknowledged the supremacy of the Croatian-Hungarian kings and paid tribute to them until their defeat at Mohács 1526. However, since 1420 delegations traveled regularly to the Ottomans, who in addition to the affirmation of its neutrality brought aannual tributes, recently they paid 12,500 ducats until the Peace of Passarowitz 1718.

After gaining its independence (the Hungarian-Croatian king were only revenue in the form of taxes paid and ships) Dubrovnik started its life as an independent Republic of Ragusa. The Republic managed to maintain its autonomy, and the citizens of the city elected their city council and the senate. Patron of the city became St. Blaise (Dubrovnik: sveti Vlaho; otherwise Croatian: sv Blaž.), a doctor from the time of Diocletian, who according to tradition, saved Dubrovnik from an attack of the Republic of Venice. In 1416, the Republic of Ragusa managed to abolish slavery as the first city-state in Europe, while the slave trade was illegal.

In the 15th and 16 century Dubrovnik experienced its biggest economic boost from the lucrative trade with the Ottomans in the hinterland and wirh the coastal cities of the Mediterranean.

The merchant fleet of Dubrovnik consisted in the 16th century from 160 ships and was at that time one of the largest in the Mediterranean. The most important protector of the Republic of Dubrovnik was the Kingdom of Spain, the greatest threat to the independence and freedom of Dubrovnik was Venice. With the Treaty of Passarowitz in 1718, Ottomans became the access to the Adriatic between Neum and Klek. Today this part of the coast is part of the State of Bosnia and Herzegovina. The crisis of Mediterranean shipping and especially the catastrophic earthquake of 1667 led to a severe crisis of the Republic, from which the city could not recover properly.

Dubrovnik was the world's first country to recognize the independence of the United States of America in 1776 internationally. In the 18th century in Dubrovnik were over 85 consulates. The coat of arms of the Republic of Dubrovnik is also part of the Croatian flag. In 1806, the French marched into the city under Napoleon Bonaparte and in 1808 Marshal Marmont proclaimed the repeal of the Republic (the name was in use since the 15th century).

Have to see places in Dubrovnik 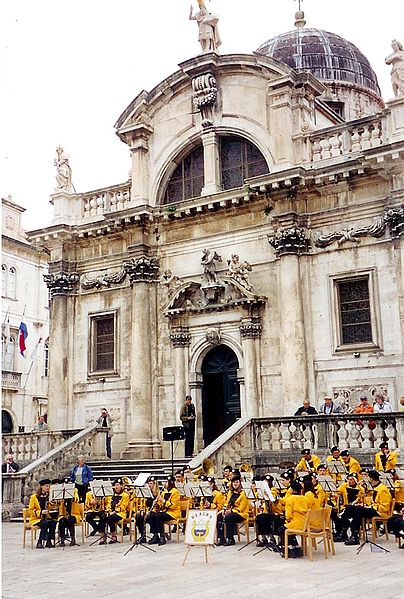 Dubrovnik belonged in 1809 as department Raguse to the Illyrian Provinces of Napoleonic France. Marshal Marmont was military governor with the title of Duke of Ragusa. After the Austrians had occupied the city on 29 January 1814, it fell to Austria by decision of the Congress of Vienna and became part of the crown land Dalmatia. The Brockhaus from 1886 portrays the city as a fortress, pretty well built and although narrow and uneven, very clean. The industry was limited to silk and leather, liquor factories and oil. A Turkish caravan came three times a week to the local bazaar.
The tourism began to develop in the early 20th century, during the Habsburg rule, even a tram line to the new port was built and existed until 1970, and the brother of Emperor Franz Joseph, Archduke Ferdinand Maximilian of Austria built a summer residence on the island Lokrum (it. Lacroma).

Dubrovnik belonged from 1918 to 1941 to the "first" Yugoslavia. Tourism evolved at first on an exclusive basis. Luxury villas arose as the still existing, orientalizing Sheherezade Villa (Villa Seherezada) of the Estonian-American hotel and casino millionaire William D. Zimdin south of the old town. As part of the restructuring of internal borders, Dubrovnik became in 1939 due to historical reasons, and the majority of Croat population a part of Banovina Croatia (Banovina Hrvatska).

During the Second World War the city was part of the so-called Independent State of Croatia. After 1945 Dubrovnik is part of the Croatian Republicof in the second Yugoslavia. In 1956, in Dubrovnik was a major architectural and historic event: The 10th (and penultimate) from the series of CIAM Meetings (Congrès Internationaux d'Architecture Moderne). The city was in the postwar period a major aim of the Adriatic tourism.

In the Croatian war the town, which is a UNESCO World Heritage, was under siege of Serb-Montenegrin forces and was heavily bombarded. According to the Croatian Red Cross a total of 114 civilians were killed. The material damage is almost fixed now and the city is again the most popular holiday destination in the region. 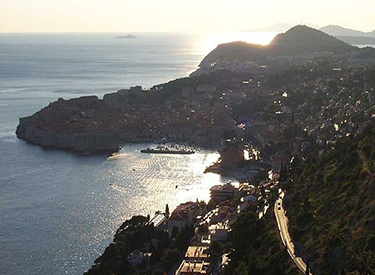 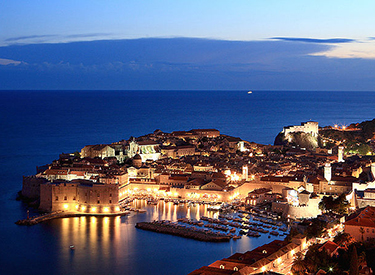 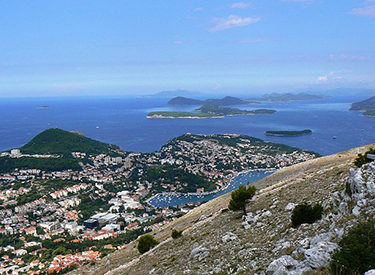 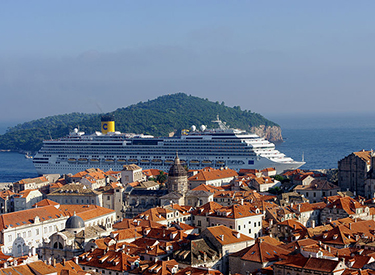 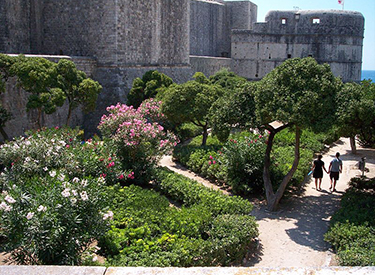 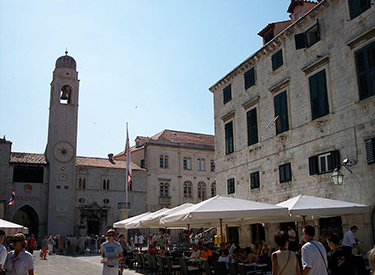 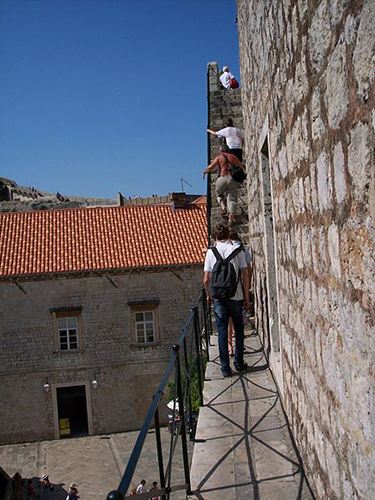 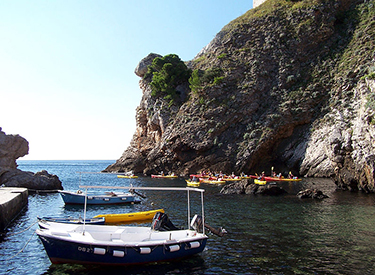 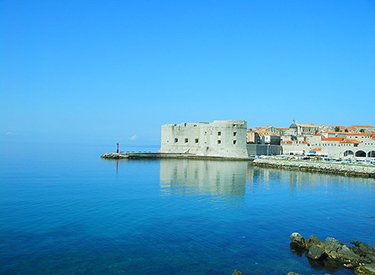 Information about the Marina Dubrovnik

The ACI Marina Dubrovnik has a supermarket and laundry facilities. A swimming pool and tennis court, sports recreation.

Photos of the Marina Dubrovnik 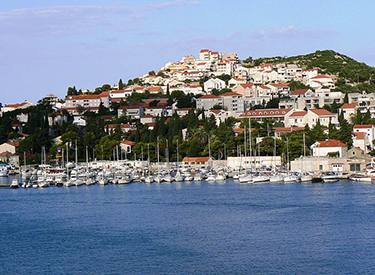 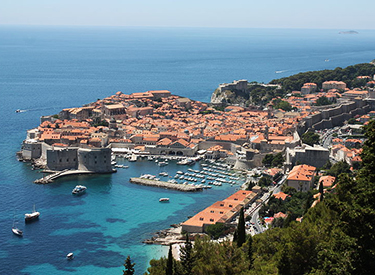 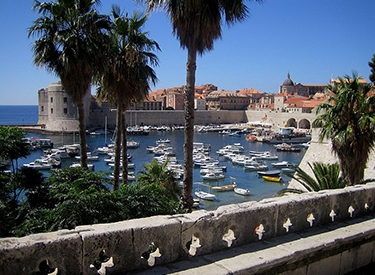 Video of the Marina Dubrovnik

How to reach to the Marina Dubrovnik