Sailing on the Croatian coast

Whether Istien & Kvarner, South & North Dalmatia or Southern Croatia. The Sunja Yachting Team is pleased to be able to show you with this voyage schedule a little insight into the beautiful fantasy world of the Croatian Adriatic.

Cruise 1: The North - Through Kvarner and Kvarneric, total 200 sm

As you look at it and applies whether the crew in charter Marina Veruda center starts at Pula or on the island of Krk, trips through the sea lanes of Kvarner and Kvarneric are full of history and special experiences. Only the Bora could interfere.

Let's start in Pula and with the observation that many of the following destinations can be almost as well driven by the island of Krk, where maintaining a base in Marina Punat scarcely less charter companies. But let's start in Pula. The old town of Romans hiding their history just near the Marina Veruda behind a facade unadorned tower blocks, but the old center holds unique treasures. 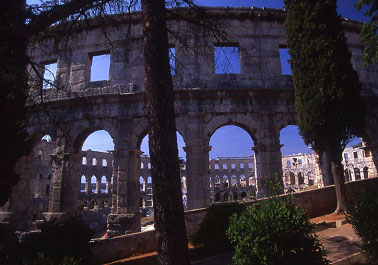 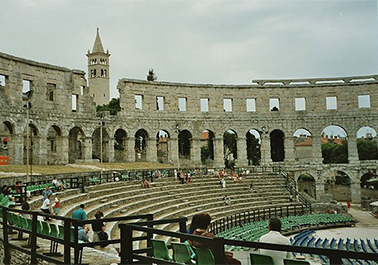 Whoever uses Pula only as a launching port, jumps simply too short. Near the old town namely overlooks an impressive amphitheater from the time of the Caesars the harbor bay. Hardly less than the image of Rome and well received. Where today lure concerts, once the leadership delighted in when bloody battles. Todgeweihte wallowed here 2000 years ago in the dust and shed their blood in the last battle with terrible beasts. Story. Today no longer walk with the toga clad through the streets.

The jump of Croatia's Istria peninsula to the south, it is not long. And it was by some. Because of Kvarner, as the sea between the mainland and the island of Cres is known for centuries, is the realm of Bora. If the sharp northerly winds, it also poses the biggest waves and repeatedly called on its toll.

Especially in spring and autumn is a closer look at the weather development needed. In midsummer, the Adriatic behaves mostly quiet and peaceful, even in Kvarner. Then the crew can (perhaps after a short pause in the bay of Medulin) Disconnect the course on the island of Unije. Lighthouse Porer remains slow astern, the highest elevations of Cres and Losinj have early the right way to the islands of Dalmatia. Unijes Harbor Bay is a place of rest. The ferry pier briefly and kept free at certain times. The water crystal clear and wonderfully refreshing for a country walk through the place and the resignation upstairs where the views of the other side of the island attracts. Who has no place, could easily remain so wonderfully quiet it can sometimes go here.

However: Pier and anchorage are of open nature. Those seeking a change for the evening, is better off safe with a visit to Mali Losinj.

Even if the rush is summer day big there and now quite hefty prices are collected in the city harbor. Power boaters restrict better the ride, because who is going too fast, is here like to have to pay. So: Better driving economically and spend the money saved on the new gas station near the marina. Or for a feudal

Dinner at one of the many bars around the elongate natural harbor and a large ice afterwards.

Mali visitors would do well to set the alarm, because the swim stop the next morning the best anchorages are awarded early.

Like a magnet attracts in calm weather, the small sandy island of Susak water sports on. A good hour at fine wind and climb the anchor can fall into the wide open bay on Susaks northeastern flank.

Susak is special. As a green block, the island appears sometimes, decorated by the red roofs of a settlement that has its slumber ended long ago. More and more tourists brings the small ferry in the summer on the extraordinary island, which is built of sand, and so do not want to fit into the rocky phalanx of Adriatic islands. 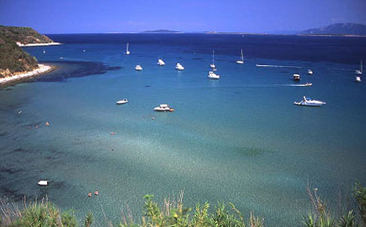 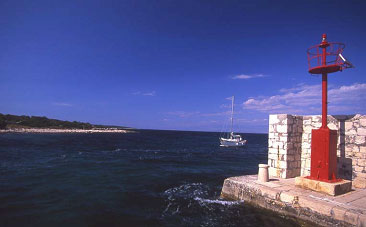 According beautiful is the anchorage near the small harbor, the maximum sums a dozen yachts. Gently increases the sandy bottom for reed passed cliffs, mixed a magical turquoise into the water, as we find it rare in Croatia. A place to hang out permit. And a place that you have to flee when threatened Bora.
Once around Susaks Eastern Cape and crew and skippers have set new goals, the following islands in the southwest already in view. The flowers Ilovik before Losinj southern tip invites for the first quick stop. Or even for the night? Ten miles further on there Silbas small harbor, and another ten miles away the somewhat expensive city "Marina" of Is. Nice restaurants, a pleasantly tranquil atmosphere and opportunity for shore will be found everywhere.

Solo: In July and August berths are occupied early, whoever comes late, risking having to resort to a mooring buoy or space. But even that can be beautiful experiences. Especially in a starry night when no thunderstorm threatens.

One last quick shopping in the small supermarket at the "main street" Silbas, which runs on the narrowest part of the island from north to south, very close boarded the love storm and enjoyed the view on all sides, already can the Mooring dissolved in the Eastern Harbour be for the morning kick to the outpost of the Zadar County, according to Premuda. 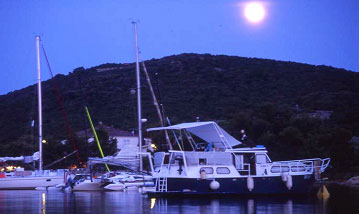 A long forgotten island, which also satisfies her pent-up demand. More and more houses built on both sides of the long rise to the center of the island, where a small supermarket opens. Down at the little harbor load even at midday some restaurants for refreshments, who comes at night, should know that here also the Peka furnace is fired up.

Even without culinary delights is Premuda worth every visit. Crystal clear water on the anchor and buoys place, many fish swimming around the boats. Who makes the diving mask in the locker, is your own fault. So refreshes can be the second part of the day to tackle fine. A short stroke and even the island of Ilovik is reached again.

Iloviks small harbor and the large buoys field lie in the narrow passage the neighboring island of Sv. Petar. Several restaurants at the water and modern bars in recommended here for the evening. You can munch on an ice and can act on the village life - perhaps the best in Church Square, where many get at the village well water.

Of the nautical restore a leisurely day. And one day, at the end of one of the finest goals of this trips will be: the old town of Rab on the island of. But before the crew will moor in the bay Rovenska, where the restaurants push their tables and chairs up to the pier. 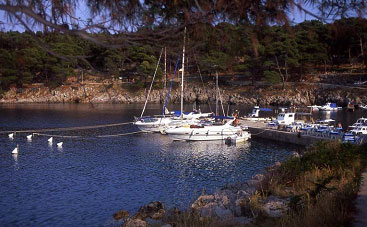 The bay simply offers more boot space and is located at the southern end of the
Place which was once more important than Mali (small) Losinj. The Old Port at the foot of the powerful Church of Saint Anthony is within walking distance of a quarter of an hour, and you can take a path above the small cliffs and stroll back through the zag alleyways.

The midday break for swimming takes place on that day far away from the islands, provided the weather cooperates. Where loses the southwest of the island of Cres submerged into the sea extends four miles northeast of the islet Rovenska Oruda out of the water. Anchorages on little water abound here, a very special place.

The final blow is done quickly and after two to three hours under sail Rab is reached, Rab with its incredible view: four bell towers in a row, set up like tin soldiers. At least one tower should climb it, for a view of the old town of the resort, its pulse At length appreciably in the evenings.

Rab is an old summer resort, behind the old walls modern times have not stopped. How many places in Croatia. At night, visitors slide through the streets, strolling through the polished limestone and past brightly lit shops. A magnet, not only for boaters, where the ACI marina is commended.

A day to relax and swimming with an abundance of beautiful bays. Cruise Rab: Just to relax. 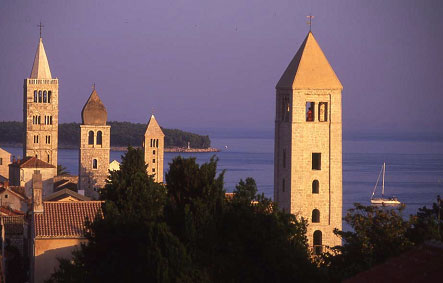 Even the numerous cuts in the green north-west part of Rab request a visit,
but follows the best yet: namely the anchorages during islets Maman at the entrance to the bay Supetarska Draga. And if that is not enough, simply continues to the northern tip of Rab, still passing through the town Lopar.

Here, in the realm of motor boats, followed by sandy bays every few cable lengths.
This is something special on a trip through the Adriatic. The best place for the night finds the crew now on Krk and has the choice between the Marina Punat and the town harbor Krk.

Anchors and Baden played on this day on yachts second fiddle. After all want 36 nautical miles be mastered and really lends itself to the course around the northern tip of Cres around no stopover at, without the distance would not extend appreciably. 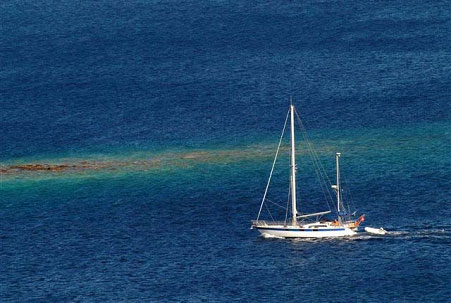 Not only longer but impossible would the trip when the Bora uses.
Against wind and current passage is hardly feasible through the strait between Krk and Cres.

The weather development must therefore pay a lot of attention.
The town of Cres is a nice reward for a long day at sea, the old town, especially near the old town harbor quite lively, invites you to stroll and linger.

The highlight of the day but could be a concert in Lubenice. Since 4000 years already the settlement on the cliff is there high above the sea, today here in the summer classical concerts. Either in the church or in the square in front of the old Kirchtturm, which now houses a small tavern.

The finale is approaching. Even if now the Bora would be flown up to seven Beaufort should the passage to the bay of Medulin at Kamenjak always be feasible because of the East would come up space. One last anchor stop at the Premantura peninsula, then around the Porer lighthouse and after a few miles of the port of departure is reached. And when mooring, the crew will be surprised what you could experience it all in one week. 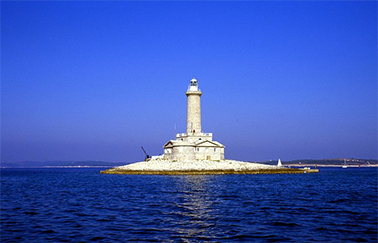 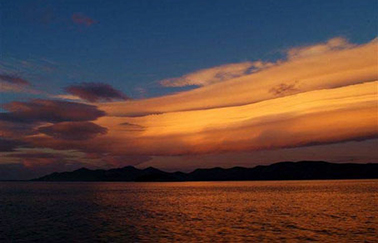 It is also highly recommended to spend some time on holiday in Croatia on land: The three regions Istria, Kvarner and Dalmatia and the Croatian islands offer many destinations that tourists should not miss. These include the beautiful city of Dubrovnik as well as the world famous Plitvice Lakes National Park and of course the beautiful beaches on the Adriatic, of which the Golden Horn of Bol on Brac is probably the best known. You will find a wide selection of holiday homes in Croatia in holiday rentals. Definitely the best option is there for you.

This voyage schedule is only a tiny portion of a variety of ways. With us SERVICE is "big" written. Cheap charter prices and full service to our customers.

We look forward to welcoming you on board Sunja Yachting and wish you much anticipation for a fantastic trip.